Why our Dev Team rocks

We recently nominated our R&D team for Computing’s 2021 Digital Technology Leaders Awards Development Team of the Year. Here was our submission, and regardless whether we win or not, this team is the greatest bunch we could ever hope to work with.

The Runecast R&D team comprises engineers, developers, QA testers, and the like, just like any other R&D team might. However, what makes the Runecast team special is a parallel focus on the customer. Customer feedback is a vital component of the software development lifecycle, and allows the team to iterate on extending existing capabilities as well as adding new features from an extensive roadmap, all the time focussed on those who are using the tool.

As organisations’ needs can rapidly change from one quarter to the next, especially in terms of IT infrastructure, any solutions that they need to stabilize and secure said infrastructure must also be quickly adaptable.

For its first version launched in 2015 and for the next few years, Runecast Analyzer capabilities were exclusively focussed on VMware environments (including VMware Cloud on AWS).

It was the first solution of its kind, and the help that it gave System Admins running those environments was unprecedented, verifiable by customer testimonials, product reviews, and other public acclaim. However, one of the R&D focal points was already in place: listen DAILY to customers. By 2019, it became clear that cloud formed a major part of IT Operations and there was a major need for insights beyond VMware.

By Q4 2019, Runecast Analyzer learned it would receive an EU Horizon 2020 grant for expanding its predictive intelligence to other platforms and was able to set a new development milestone by providing configuration, best practice, and security compliance insights also for AWS. Despite the challenges for both backend and frontend development, Kubernetes was also added to the analyzer’s capabilities by the end of Q3 2020 (as well as a long list of new features and security standards).

Customers responded positively, that these changes were aligning to the rapid changes – or planned changes – in their IT infrastructures. As further validation of the R&D team’s approach to development, the innovative technology behind Runecast Analyzer received a US patent, Gartner named the company a Cool Vendor in Performance Analysis for Cloud-Native Architectures, and computing announced Runecast Analyzer as the winner of its 2020 award for Cloud Security Product of the Year (SMEs).

Heading into 2021, while adjusting to a new remote work dynamic brought about by the pandemic, these achievements were not without major challenges. As mentioned, both backend and frontend development had to provide predictive analytics for new technology platforms that were very different from the initial VMware offerings.

In 2021, while working on next expanding Runecast Analyzer’s capabilities to Microsoft Azure, the team in parallel reworked every aspect of the analyzer, from being able to deploy natively and enabling separate licensing for each of these additional technologies to rethinking how such a vast amount of information could be displayed even simpler in a single dashboard for IT teams. While Runecast Analyzer has been around for over 6 years, the industry and technology have both grown around it. Constant reassessment and redevelopment of the engine is no mean feat, but is vital to meet the needs of IT Ops and Sec Ops teams worldwide. This laser focus on the customer is what makes the Runecast team stand out from the crowd.

The team has remained undaunted and is a constant source of inspiration to the other teams within Runecast. If minor bugs get through, they are handled rapidly by regular (weekly) updates. Licensing now allows for native deployment directly from, for example, AWS Marketplace or Azure Marketplace.

Remarkably, the achievements mentioned here comprised an R&D team of around 20 people at its largest. We are very proud of what they do – not only for Runecast but for mission-critical IT operations affecting billions of people around the world.

Since submitting the above in June, our R&D team have blown our minds once again, this time adding Remediation and Configuration Vault features to Runecast Analyzer on 8 July, and in such a way that their capabilities can be expanded quite easily along with our regular weekly updates.

If you’d like to talk with one of our R&D or Sales engineers, contact us here. Or, if you prefer, you can go ahead and test Runecast Analyzer in your own environment, to see which issues it will reveal.

Our customers and partners tell us that, once they tried Runecast Analyzer, they couldn’t afford NOT to use it in their tech stack. 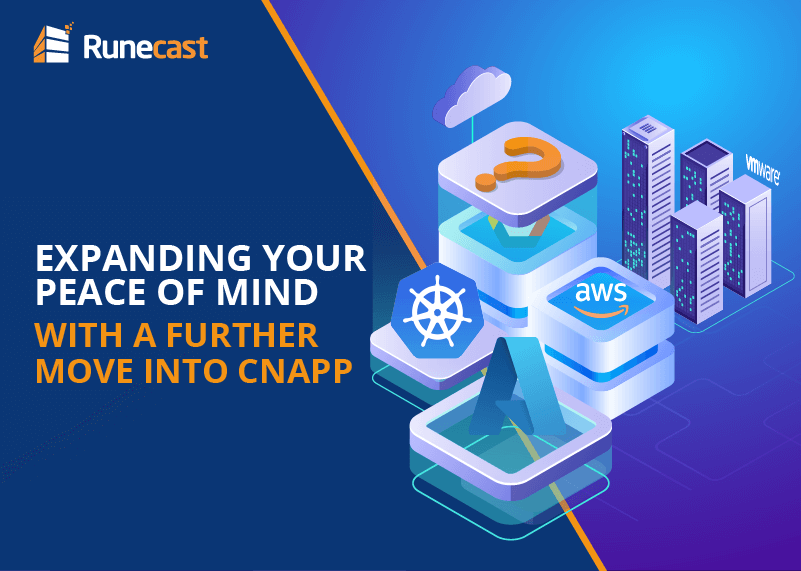